The term “soil health” describes how soil functions. Ogallala region farmers need to know how to maintain and improve soil health, particularly in areas where the aquifer resource has been or will soon be exhausted.

“Understanding soil health means assessing and managing soil so that it functions optimally now and is not degraded for future use.”

In the Ogallala Aquifer region, as producers in some areas shift away from irrigated production (predominantly corn) to planting more dryland wheat, sorghum-​based rotations, and/​or other less-​standard crops, including forages, a new soil carbon balance will be reached over time.

Depending on the shift in crop rotations, this transition may result in increased or decreased crop residue inputs into the soil, and thus different impacts on soil microbial communities and soil health. Typically, it can take several years to realize the benefits of shifts towards soil health-​oriented management.

Soil teems with life. A teaspoon of soil can contain as many as one billion cells belonging to thousands of individual bacterial species, one million fungal species, and thousands to millions of algae and protozoa species. All of these microbial groups — called the “soil microbiome” — complement each other’s contributions to healthy soil function. The soil microbiome regulates 80 – 90% of important soil processes including decomposition, nutrient cycling, soil and water detoxification, and disease suppression. 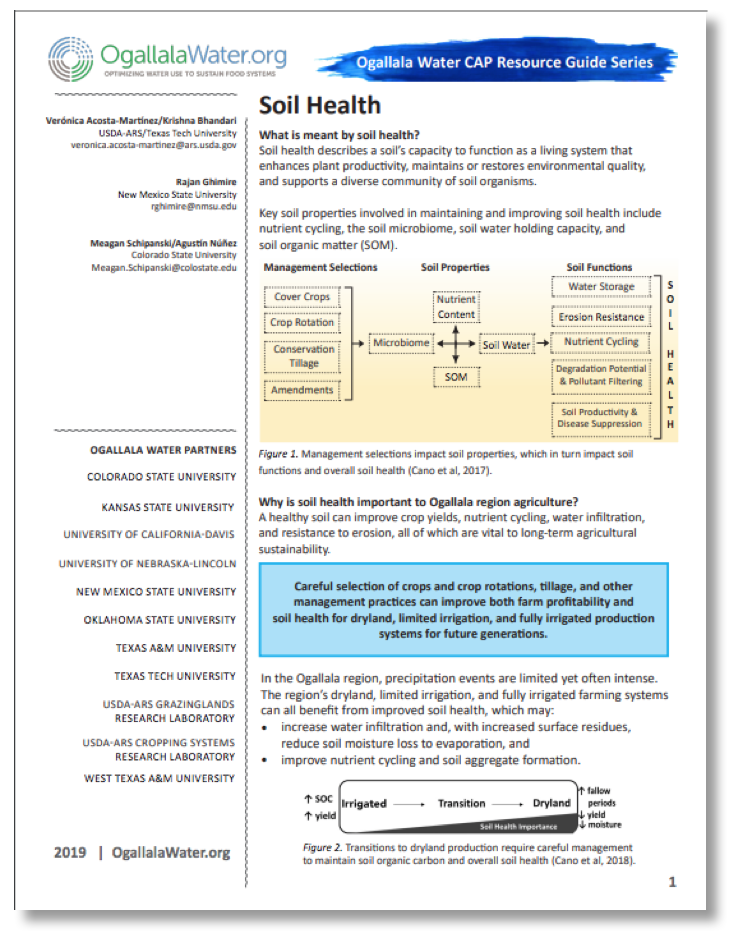 The soil microbiome at work. One important measure of soil health is how soil particles are bound together to create soil structure, which affects water infiltration and storage. Soil fungi play an important role in binding soil particles together to help create and maintain soil aggregates or soil structure. Arbuscular mycorrhizal fungi are involved in root and soil interactions that lead to plant nutrient uptake. Actinobacteria help decompose complex substrates found in soil, such as lignin. Other bacterial populations including Clostridium, Azotobacter, and Rhizobium help fix nitrogen. 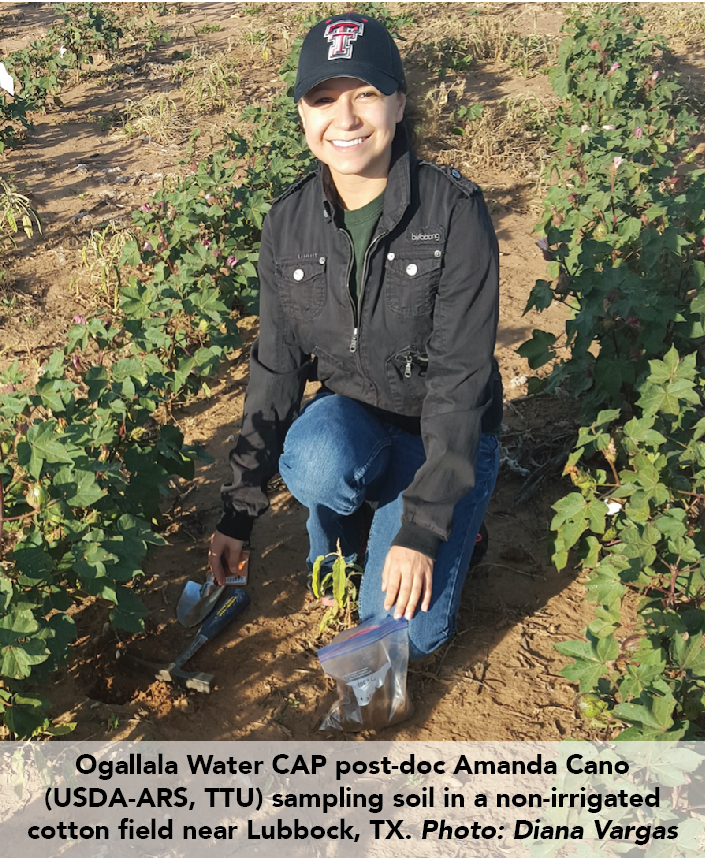 Soil organic matter (SOM) is a critical component of soil health because of its roles in soil nutrient availabiltiy, soil water storage, and in providing the environment that sustains the soil microbiome. Soil organic matter is made up of plant, animal, and other materials in various states of decomposition.

How much SOM builds or is maintained within agro-​ecosystems depends on several factors including how much SOM is present, soil management practices, and environmental conditions. The metabolism of micro-​organisms also affects soil organic matter changes.

In the Ogallala aquifer region, low levels of precipitation, coupled with high evaporative demand, leads to lower soil organic matter levels compared to those typical for soils in the Midwest U.S.

In limited irrigation and dryland systems, conservation tillage practices that keep the soil covered and fed with plant residues is expected to improve soil organic matter and the soil microbiome’s adaptation to climate variability, including prolonged drought, and to increase water use efficiency and crop yield.

Dr. Veronica Acosta-​Martinez is a soil microbiologist and biochemist with USDA-​ARS based in Lubbock, Texas who studies how the soil microbial community is affected by management selections and climate variability across the OAR.

In her lab, Dr. Acosta-​Martinez looks at how the size and nutrient cycling activity of soil biomass (a.k.a. the soil microbial community) is affected by different field management practices, to identify practices that effectively promote soil health.

Dr. Ghimire’s study of how land use, cover crops, and alternative cropping systems affect soil health was featured in txH2O (Fall 2018, Texas Water Resources Institute): “Mixing it up: In the Ogalalla Aquifer region, one size (of farming) does not fit all.” 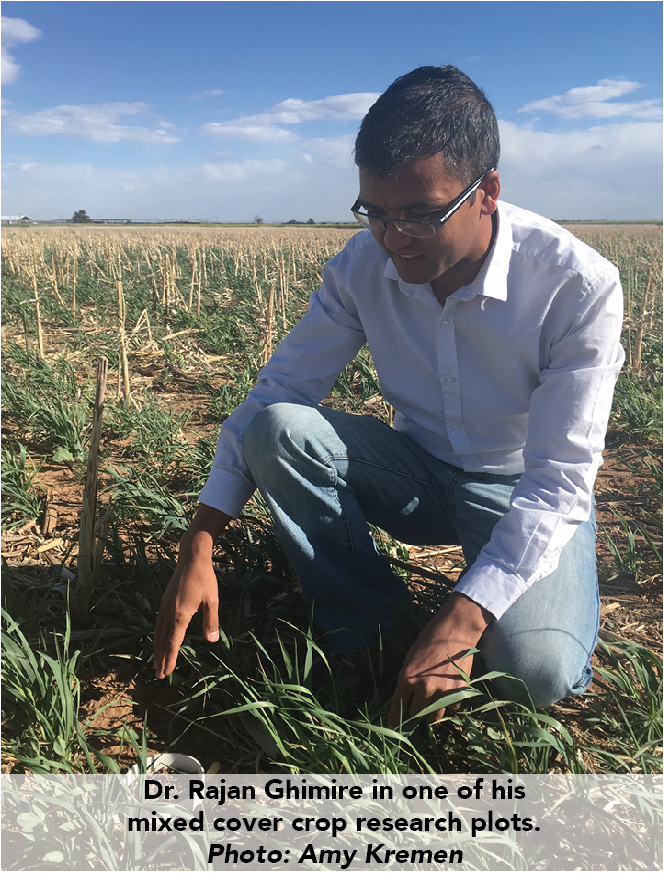 Dr. Meagan Schipanski and her team at Colorado State University have partnered with Ogallala region producers to evaluate soil sampled at different time points elapsed since fields were last under irrigated management.

This information will be integrated with data from an ongoing experiment at a CSU field research station to better understand the processes behind soil health changes during the transition from irrigated to dryland production.

Agricultural practices developed in the wetter climate of the eastern U.S. are being adapted and modified to support successful, rain-​fed production by focusing on building healthier soils for improved resilience.

Scroll to the bottom of the dryland​.org homepage for a storybank featuring 8 interviews with innovative dryland farmers and scientists. 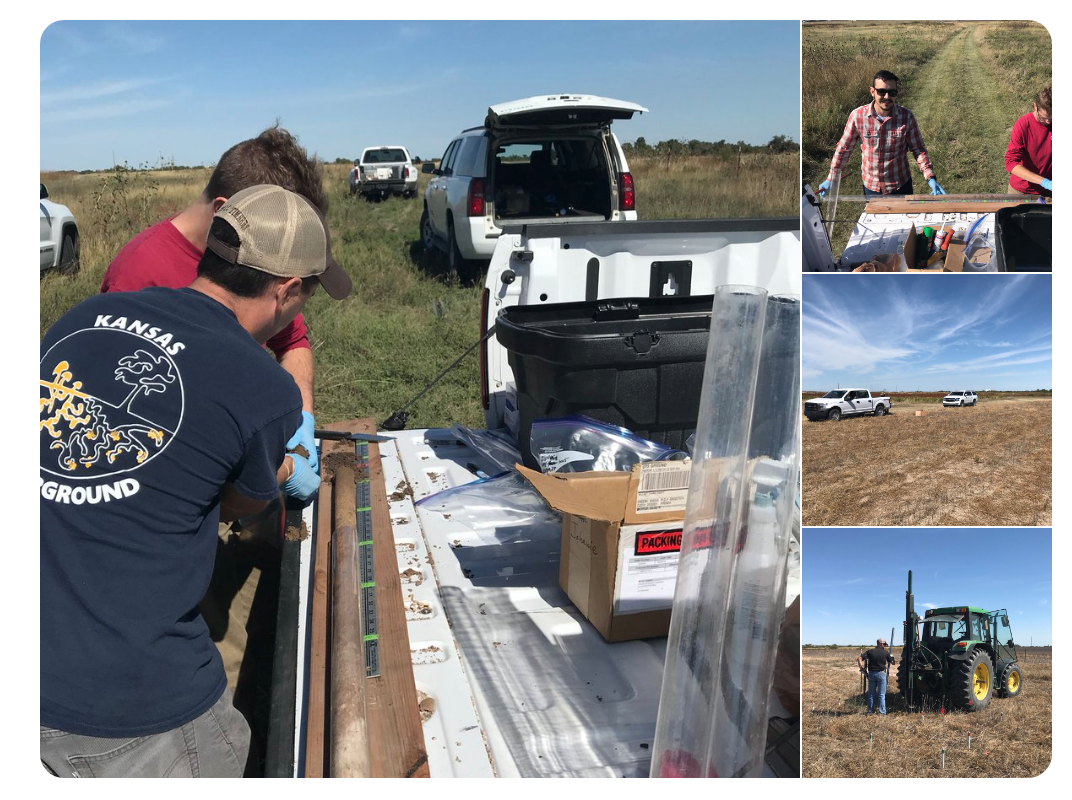 Sampling soil to study how the microbiome is affected by land use across Kansas’s precipitation gradient.
Photos: Marcos Sarto

With a proper selection of crop rotation, tillage, and other relevant management practices, it is possible to maintain a healthy soil for limited irrigation or dryland production systems for future generations.

The best management practices for soil health will depend on each region’s climate and soil conditions. Nonetheless, maintaining or improving soil health during a transition to dryland will play an important role for agricultural sustainability and resiliency in this region and in similar agro-​ecosystems worldwide facing increasing water limitation and climate variability.